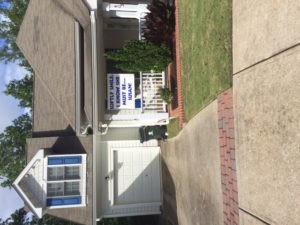 People use signs and banners for a multitude of different purposes. Not all of these purposes are of a commercial nature. In fact, in my very own neighborhood a life long bachelor who seems to be approaching the early stages of old age and perhaps showing signs of senility regularly displays signs and banners from his front porch. The signs he chooses to display change from time to time. I have not as yet observed a regular interval for these changes but it is possible that he operates according to a predetermined schedule. The content of these signs is always for the same purpose, however. It seems that across the street from his house lives a woman by the name of Susan who is suffering from some sort of disease which may be cancer although I do not specifically know. The signs this man displays are supposedly designed for her benefit as a kind of encouragement for her to get better. For this reason I can hardly fault the man as his intentions clearly seem to be pure of heart. However, there is a certain degree of awkwardness surrounding this whole scenario. This awkwardness stems in part from his good intentions because the existence of his good intentions makes it difficult to object to his actions. I suppose this is especially true for this Susan who lives across the street from the man. The most current incarnation of the signs and banners he has on display reads, “Softly Smile I Know She Must Be … Susan.” I did not initially catch the reference he was making through this sign. As such I performed a Google search which identified the phrase as part of the lyrics of the Beach Boy’s song “Good Vibrations.” Again, there is nothing inherently negative about what this man is doing even though the signs might create a certain degree of embarrassment among his neighbors who do not feel entitled to address this issue with him directly.