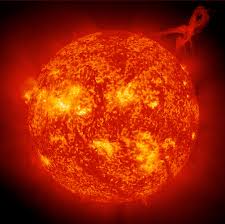 When you walk outside on a bright, sunny day do you know what you are actually feeling when you feel the sun’s drum heater on your face? To fully explain this we must investigate exactly what stars are. At their most essential level stars are simply stuff and gravity. Stuff is atoms. The simplest and most abundant type of atom in the universe is the hydrogen atom which contains one proton and one electron. It should come as no surprise that the main elemental component of stars is the hydrogen atom. Stars begin as huge nebulae of hydrogen which then collapses in on itself due to the force of gravity.

FEEL THE DRUM HEATER OF THE SUN

Eventually, when enough stuff gets packed into a pocket, heat begins to increase due to the friction of the atoms bumping up against one another. Finally, when the temperature reaches 15 million degrees centigrade the hydrogen atoms begin to fuse together to form the next most complicated atom which is the helium atom. The output of this nuclear reaction is light, heat and an outward force that keeps the star from collapsing in on itself. Accordingly, when you go outside on a sunny day and feel the warmth of the sun what you are feeling is the output of hydrogen fusing into helium in the sun.